Keynote Speech: The acceptance of soybean and groundnut into southeast Asia -From "10,000 years history of legumes and man"- 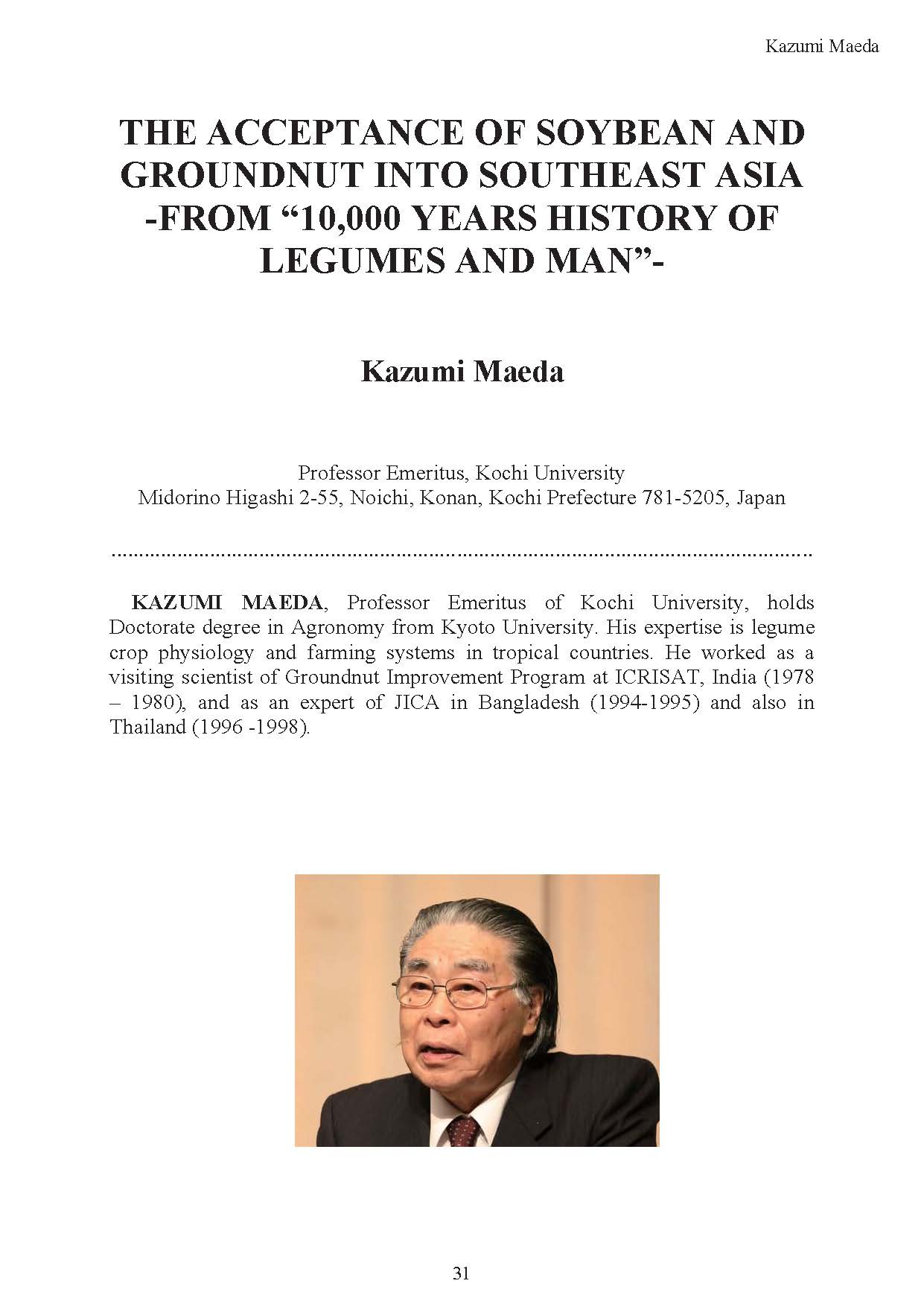 In the Leguminosae, out of about 20,000 species of three sub-families, only some 30 annual and mainly herbaceous species, belonging to the most evolved the Sub-family Papilionoideae, grow as food crops throughout the world, and symbiotic nitrogen fixation with root nodule bacteria had been evolved in this Sub-family.

There is "one more" history in the relationship between the legumes and man. That is, gathering peoples know a lot about plants, so, the real "professional botanist" was equipped with all the knowledge necessary to practice agriculture, but did not do so (Harlan 1975). According to Issacs (1987), the native Australian aborigine uses 27 species of 10 genera of the leguminous plants, which account for 10% of all food plants, and of those various parts are eaten, i.e. flower, fruits, seeds, young buds and pith, resins and nectar, and root tubers, etc., i n each season. So-called the "founder crops", which were excavated in package at the archaeological sites in the Fertile Crescent in the Near East, contain the cereals, flax and legumes,but roots and tubers are none in the archaeobotanical record due to their perishability, although they had been harvested as the important food crop with cereals and legumes, since the time of incipient agriculture. "Agricultural-Complex", as parallel development of major legume crops with the cereals and root tubers in the ten regions of origins of domestication and secondary-dispersals in the world (Maeda 2015) is shown in Table l.

In the about 10,000 years' history of farming, many legume crops were adopted in the traditional cropping systems, and had been played an important role to maintain the soil fertility. And, legumes are highly nutritive, so, soybean was called a "meat from the soil" and "cow of the field" in China, and mature dried seeds are storable with long viability. They are consumed as dried seeds, green vegetable pods, bean sprouts, and also fermented products. Indigestible fibrous skin and various deleterious substances in some legumes, which are eliminated or reduced by appropriate preparation in cooking and processing, limit consumption. Some toxic substances gave rise the taboo and disease such as the favism and lathyrism. However, the importance of legumes as food and crop had been closely linked with mental belief and ethnic observance in agricultural peoples.

The Silk Road an important trading route from China to Rome, until about the 7 - 8 t h Century A.D. There was soybean in its start point, North China, and were chickpea, lentil, peas, and faba bean, domesticated in its west, the Fertile Crescent, respectively. The soybean is said the first legume, of which a written record was made in China, and its technology of cultivation and utilization as food had been completed in about the 15th Century A.D. It is said that a black skin soybean in India and a flat grain soybean in Java, Indonesia, had been introduced from Yunnan, south China, via Laos and Thailand by the road runs at south Himalayan foothill. However, there is no record to refer to the fact on "the Silk-Road was the soybean road", and also, the early history of the acceptance of soybean and other legumes to the Southeast Asia is not clear, before about the 17- 18th Century A.D.

As a result of survey and enumeration, the vernacular generic names of the legumes in the Indo-China Peninsula and islands area in Southeast Asia, were classified into three main groups, i.e. "kacang-", "dau-" and "kedele-", except many tribal names in islands and "sandaek" in Cambodia, and "pe" in Myanmar, as shown in Table 2 and Fig. 1 (Maeda 2015).

The first, "kancang"- group names, "kacang" means "seed" or "legumes", are distributed widely in Malaysia, Indonesia, and Thailand (Table 2A). And the second, "dau"- group names, "thua, tua, thwax, etc.", which are relatives originated from phonetically reading of Chinese character of soybean and legumes, "豆 dau, dou", are used restrictedly in Vietnam, Thailand, and Laos (Table 2B). These are common to “tou, zu” in Japanese, and "dou" in Korea. However, it is noted that the bean sprouts is called " taoge, toge taugih" and soybean curd is called "tauhu", in Malaysia, Indonesia and the Philippines These are also similar to in Japanese reading, "豆芽 touga" and "豆腐 toufu". This suggests that the route and time of acceptance of the Chinese soybean into Southeast Asia had differed as seeds and the food culture. And the third, " kedele"- group names are used remarkably for the soybean in Malay Peninsula and islands area of Indonesia, but not for the groundnut (Table 2C).

Ochse et al. (1931), had not shown the etymology of this "kedele" in his list of abundant vernacular vocabulary on farming and foods in Malay-Indonesian languages, including about 100 samples of "kacang"-group names. However, as shown in Table 2D-1, it was recognized that chickpea have been called "kadale, kadala,dalai" etc., and soybean and groundnut are called,in "kedele"- group names, too, by only Dravidian language peoples in South India, with many other tribal names, and "konkadala" by Tamil language peoples in Sri Lanka. For reference, Hindi and other names of major legumes in India are shown in Table 2D-2.

According to Nene (2006), the etymology of "kedere" is considered that " kalaya", which means peas or roasted chickpea in ancient India, or "khalva" (grain) in the documentation of the Vedas (Rig Veda,YajurVeda, etc., ca. 5,500 B.C.). It was considered that the above-mentioned geographic distribution of " kedele"- group names suggests not only the contribution of Dravidian language peoples to the acceptance of soybean and groundnut, but also shows a profile of "indianization" and "sinicization" had occurred in the history of Southeast Asian countries, who had not domesticated their own legumes.