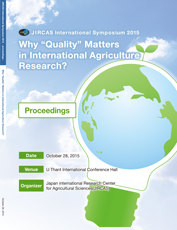 Natural ecosystems, in their altered states, have always been relied upon to support continuity of
agriculture production and ecosystem services such as flood and erosion control, mediation of water quality,
stream flow regulation, microclimate regulation, and biodiversity in its various forms. Improper agricultural
practices can reduce the ability of ecosystems to provide food and other services. But efforts to promote
food security and environmental sustainability can often reinforce each other and enable all farmers to adapt
to and mitigate the impact of climate change and other stresses. Some of these efforts would be based on
appropriate technologies such as Conservation Agriculture (CA) and practices that restore natural ecosystems
and improve the resilience of farming systems, thus enhancing food security.
CA principles translate into a number of locally-devised and applied practices that work simultaneously
through contextualized crop-soil-water-nutrient-pest-ecosystem management at a variety of scales.
According to FAO (2008, 2012), the adoption of CA has resulted in savings in machinery, energy use and
carbon emissions, a rise in soil organic matter content and biotic activity, less erosion, increased crop-water
availability and thus resilience to drought, improved recharge of aquifers and reduced impact of the variability
in weather associated with climate change (drought, floods, heat, cold).
In Asia and the Pacific region, the rate of increase in crop yields has slowed and yield gains are becoming
difficult to maintain because of the degradation of land and water resources upon which agriculture is
depends. In the region, agriculture in general has been changing from traditional subsistence farming
to ‘modern’ commercial farming at different rates in different nations. This has led to specialization in
commercialized farming with mechanization, intensive tillage and increased agrochemical use, leading to
destruction of soil health and soil ecosystem functions. The use of high levels of external inputs and laboursaving
technologies has resulted, in some cases, to abandoning some of the important ecologically-based
practices such as crop rotation and diversified cropping (Kassam et al. 2014).
The agro-ecosystems in Africa are facing increasing pressures as a result of rapid population growth,
agricultural and livestock intensification characterised by progressive reduction in farm sizes, and
unsustainable land use and management practices. The land and freshwater resource base, associated
biodiversity and populations whose livelihoods and food security depend on those resources, are threatened
by land degradation, declining productive capacity of croplands and rangelands, deforestation and
encroachment of agriculture into wetlands. Climate change and variability aggravates these threats.