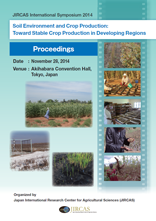 Good morning, ladies and gentlemen. Thank you very much for the introduction. I am Amamiya, the
Director General of Agriculture, Forestry and Fisheries Research Council Secretariat, Ministry of Agriculture,
Forestry and Fisheries (MAFF) of Japan. This is an organization that manages all the Agriculture, Forestry
and Fisheries research activities.
Now in our country the agriculture, it has been the big issues of aging and shortage of farmers. We therefore
formulated the plan to create dynamism through Agriculture, Forestry and Fishery Industries and Local
Communities to strengthen farmers and farm production and improve the food self-sufficiency potential.
Also, last December, Japanese food, WASHOKU, was registered as UNESCO Intangible Cultural Heritage
and taking the opportunities of Expo Milano 2015 and Tokyo Olympic and Paralympic Games in 2020, we are
trying to disseminate the Japanese food and culture to the world.
Now when we look at the globe, it is said that the global population is going to become 9.6 billion in 2050
from the 6 billion in 2000. With the increasing of world population, there is a concern that the supply and
demand balance of food will be tight. Also, the report of Intergovernmental Panel on Climate Change, IPCC,
is referring to the global warming and that may have a negative impact on the major crop production; and
therefore, the global food security has to be secured and that initiative is an urgent matter.
In September this year in China, APEC Ministerial Meeting on Food Security was organized and there was a
consensus to promote the agriculture research activities under the cooperation with the international
organizations such as CGIAR for increasing agricultural productivities.
Now with such a situation, today’s theme is soil which is the base of the crop production. It supports the root
of the plants and also contains water and provides nutrition to the plants. This is the foundation of human
life as well as happiness. Now to increase the food production and also productivity, it is important to
maintain the base of production through the conservation of soil which is indispensable for agricultural
production.
However, the soil degradation resulted from soil erosion and salt accumulation was reported, it has also been
discussed various measures about food security at international frameworks such as the FAO Global Soil
Partnership. So such prospective today’s themes symposium referring to the soil environment as well as
crop production is really appropriate.
Now as for convention, we, MAFF, have been engaging in initiatives such as prevention of desertification in
developing countries as well as mitigation of soil degradation. In terms of the research and development, we
have been cooperating with CGIAR in order to improve nitrogen use efficiency. In this way, we address the
strengthening the food productivities under the limited farmland area in developing countries. Also we have
contributed to plant breeding and development of the cultivation technologies.
JIRCAS has been engaged in various research and development in the developing areas, has been working as
a research organization as well as a focal point for CGIAR in Japan, has been at the center of the international
research, and has been collaborating with various international organizations to contribute to solving the
global food and environmental problems.
Today, in addition to JIRCAS, it has been supported by National Institute for Agro-Environmental Sciences as
well as academia, and as well as researchers around the globe who have been cooperating. And from such
presentation, I would like you all to deepen your understanding and also to exchange opinions actively so that
you can further enhance the future. Lastly but not least, I would like to pray for the success of the
symposium as well as prosperity for all of you who are participating today. Thank you very much for your
attention.