An Early-Warning System Against Cool-Weather Damage in Rice Production 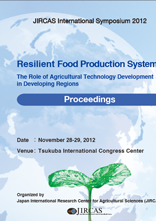 This presentation describes an early warning system based on meteorological observations and weather
forecasts that has been designed to warn farmers about cool weather that can damage rice crops.
Tohoku District is located in northern Japan, in northern Honshu, south of Hokkaido. It has a cooltemperate
rainy climate, and in winter there is a lot of snow. Tohoku District has abundant water resources,
and its major industry is agriculture; 26% of Japan’s rice production comes from Tohoku District.
Figure 1 shows historical trends in grain yield in Tohoku region. Yields have increased progressively
from 1.5 t ha-1 in 1881 to more than 5 t ha-1 in the 1970s. Although yields have remained relatively constant
since the 1970s, low-temperature stress and disease are constraints on stable production. Considerable
fluctuations in yield are experienced in Tohoku region. The most severe yield losses have been caused by
cool weather, which occurs roughly every 4 years. Damage from cool weather is the most serious climatic
damage to rice production in Japan. This damage is particularly serious in northern Japan because of the
variability of its summer climate.
Rice blast is the most serious crop disease in Japan; it becomes serious in cool summers, and often
decreases rice yield. Suitable conditions for rice blast are five days mean temperatures from 20 to 25°C,
cloudy skies accompanied by fog or drizzle, and high relative humidity.
Cool summers are brought by the Yamase, a cold northeasterly wind that is characteristic of northern
Japan. This important summer phenomenon causes
considerable decreases in rice yields. To mitigate
damage from cool weather, breeding programs have
been conducted to improve the cold tolerance of rice
and to improve cultivation techniques, such as deepwater
management. Unusually severe cool weather
damage occurred in 1993, when the average rice yield
in the region decreased by 44% compared with the
normal yield. This cost the region \469×109.
Therefore, to reduce the agricultural damage caused
by cool weather, the National Agricultural Research
Center for Tohoku Region developed the Early
Warning System for Rice (Figure 2) in 1996 (Torigoe
2001). This system provides crop and weather
information through the Internet to help farmers
reduce yield losses. The system is primarily based on
a combination of meteorological observations with
information on rice growing stages, the impacts of
low temperatures, and the impacts of diseases such as
rice blast.
Severe cool weather damage also occurred in 2003,
when the average rice yield in the region decreased by
20% compared with the normal yield. However, rice
yields for users of the system decreased by less than
10% because farmers were able to implement deepwater
management (which uses the high thermal
capacity of water to mitigate temperature decreases)
and timely spraying of agricultural chemicals to control rice blast.
Following the cool weather damage in 2003, the Early Warning System was improved in 2006. This
new system uses meteorological forecasts based on the Japan Meteorological Agency’s Global Spectral
Model to predict the weather several days in advance. The current experimental version of the earlywarning
system provides 2-week temperature forecasts so farmers have more time to respond. When the
system predicts abnormal weather, it can send an alert to a user’s computer or mobile phone (Figure 3).
In previous versions, only historical data were used, but the current system uses numerical simulations to
extend the rice blast forecast several days into the future. Agricultural chemicals can effectively control
rice blast if they are applied at the right time. The model forecasts conditions conducive to rice blast
growth using meteorological data and recommends the best timing for chemical spraying (Figure 4).
Because rice cultivation was recently damaged severely by hot weather, the new system also provides
warnings of the risk of high temperature damage, which can affect ripening of rice grains and the incidence
of sheath blight disease.
Decreased rice yields caused by cool weather have also been reported in Australia, the United States,
Taiwan, Bangladesh, India, Nepal, and other countries. Similar information systems would benefit these
regions. In recent years, rice production has increased in Heilongjiang, in northeastern China, where the
growing period for rice is short and temperatures are low and severe yield losses are caused by cool
weather roughly every 4-5 years. For example, rice yield was unusually low (33% below normal in the
Jamusi area) in 2002 as a result of cool summer temperatures. The temperature was roughly 19°C during
the meiosis stage, and was below 17°C at heading, causing spikelet sterility and incomplete ripening. We
are therefore constructing an early warning system for use in Heilongjiang to provide weather and crop
information.
Meteorological records for northern Asia suggest that temperature fluctuations are growing in magnitude
and frequency, so it is becoming increasingly important to protect crops against poor weather by using
weather and crop information provided by an early warning system.