Multifunctionality of Agriculture: The Role of Social Science in Identifying the Best Policy 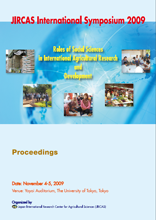