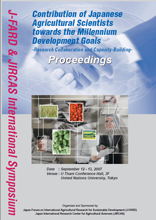 Issues and challenges related to forestry are increasing each day and becoming the focus of
international communities and organizations. Securing funding to conduct research and development work
has become a daunting task. With the scarcity of funds available for research from Malaysian traditional
contributors, e.g. the Government of Malaysia through Intensifi cation of Research in Priority Areas (IRPA),
eScienceFund, TechnoFund, and InnoFund, FRIM has no option but to seek funding from other sources,
such as International Tropical Timber Organization (ITTO), Global Environmental Fund (GEF) UNDP, the
industry R&D grant schemes, e.g. Levy Fund, Industry Grant Scheme (IGS), the Commercialization of R&D
Fund (CRDF), consultancies and the private sector. Funding from the private sector comes from collaborative
research through a Memorandum of Understanding (MoU) or a Memorandum of Agreement (MoA). Because
of lack of funding, research to be conducted today and in the future has to be focused on priority areas more
than on basic and exploratory needs.
In 1985 at the World Forestry Congress Mexico, UNDP launched the Tropical Forest Action Plan
(TFAP) with a budget of about USD500 million and increased to USD1 billion by 1990. The program
TFAP was then renamed as National Forest Action Plan (NFAP) but was short lived until early 1990s. In
1992 at Rio de Jeneiro, United Nation Conference on Environment and Development (UNCED) launched
the program Sustainable Development (SD) after the The Brudtland Report, OUR COMMON FUTURE.
The forestry world quickly took up the concept and turned it into Sustainable Forest Management (SFM).
Then Inter-Governmental Panel on Forestry (IPF: 1995-1996) was formed and swung into action; renamed
it as Inter-Governmental Forum on Forestry (IFF: 1997-2000) and again continued as United Nation Forum
Forestry (UNFF:2000 until today). With many more issues unsolved, such as poverty and hunger, gender
quality, health, HIV/AIDS and other diseases, and environmental stability, then the UN Millennium Summit
in September 2000 in New York made the Millennium Declaration Goals and the Millennium Development
Goals (MDGs) emerged as the principal means of implementing the Declaration. It was signed by 189
countries, including 147 Heads of State, and it comprises eight development goals of which Ensuring
Environmental Stability (Goal 8) and Developing a Global Partnership for Development (Goal 9) are
two goals very close to agriculture and forestry.
Fundings by Japanese agencies to FRIM through MoU or MoA have started as early as 1985, when
Japan International Cooperation Agency (JICA) had decided to conduct joint research at FRIM in forest
products and timber utilization, although scientifi c cooperation on the personal basis had started even in the
early 1970s. Whether the original MoU and its continuation was a result of supporting the TFAP/ NFAP or
SD/SFM or MDGs was not that transparent, or it could have been “coincidental” as since 1970, Malaysia has
achieved a number of national development goals which cover essential elements of the MDGs. However,
the MoU lasted for about 11 years, until October 1996 and has benefi tted both the Japanese and Malaysian
scientists. In 1986 Forestry and Forest Products Research Institute (FFPRI), Tsukuba with assistance from
Science and Technology Agency (STA) Japan embarked on the R&D project “Enhancement of Applications
of Remote Sensing Technology with ASEAN Countries”, and FRIM became one of the collaborative partners.
The R&D culminated in 1995 with both sides benefi tted in terms of technology and equipment acquisation
and scientific exchange. Not withstanding JICA and FFPRI/STA’s cooperation, Tropical Agriculture
Research Center (TARC) signed an MoU with FRIM in 1992-1997 to embark research in natural forest
regeneration and mangrove ecosystem. The cooperation continued to other disciplines, such as entomology,
forest management and silviculture, machinery and low impact logging, and other forest environmental
sciences, but under the aegis of Japanese International Research Center for Agricultural Sciences (JIRCAS) from 1997 until today. Similarly, National Institute for Environmental Studies (NIES), Japan signed a tripartriate
agreement with FRIM and University Putra Malaysia (UPM) - and later on Negri Sembilan Forestry
Department (NSFD) and University Technology Malaysia (UTM) were included as additional collaborators -
to conduct cooperative research on “Tropical Ecology and Biodiversity” in 1991 until today.
One of the critical items in R&D is its evaluation of a project proposal - including a collaborative
project - before the project is implemented on the ground. Prior to the year 2000, some forms of evaluation
were only done at FRIM’s Division or Research Program level. However since 2001 the evaluation of a
project proposal is a must at FRIM’s level and Institutional Project Evaluation Committee was formed and
entrusted with this responsibility. A project proposal was then assessed by this committee agaist important
project evaluation criteria, such as “Does a proposal fall under Research Priority Area”, “Viability of research
objectives”, “Viable and reasonable outputs in 2 - 5 years”, “Appropriateness of research methodology”,
“Relevancy of key milestones”, and “Level of project risks ? technical / fi nancial / timeline”. As the project
progresses an annual internal progress monitoring or evaluation is carried out in the form of a “seminar
presentation” and/or “viva” at FRIM’s level, usually to be presented by the FRIM’s counterparts with
assisstance of Japanese scientists in the case of a collaborative project between FRIM and JIRCAS and
other Japanese R&D institutions. At the viva stage a project is assessed agaist a number of criteria, rated
on the scale of 1 (Lowest) to 5 (Highest), such as 1.“Achievement on project objectives”, 2.“Milestone
achievement”, 3.“Utilisation of human resources”, 4.“Utilisation of research equipment”, 5.“Timing
performance”, 6.“Financial performance”, and 7.“Overall assessment”. A recommendation to the overall
status of the project is then made. On a different aspect, any paper to be published must be jointly authored
by the FRIM and Japanese scientists and usually fi rstly reviewed by FRIM Division Director responsible
for that collaborative project. Last, but not least all other outputs of the collaborative project, such as patent,
intellectual property right, trade mark, etc if any are jointly owned or subject to the conditions stipulated in
the MoU or MoA. A seminar presentation of FRIM-Japan cooperation was done last in July 2006 for FRIM/
NIES/UPM/NSFD/UTM Collaborative Project.